More on this standard

More on this standard
All Contents

Since 2013, when NCTQ first started examining programs, there has been significant improvement in what teacher candidates learn about classroom management. Half of all teacher education programs (49%) now incorporate all or almost all of the five universal classroom management strategies. Two states, Massachusetts and Missouri, deserve considerable credit for driving change. They now require their approved preparation programs to collect evidence that candidates are successfully modeling most of these evidence-based strategies during their clinical experiences.

Top-performing programs on this standard expect their teacher candidates to learn and practice five strategies supported by strong research, including a 2008 meta-analysis from the U.S. Department of Education's Institute for Education Sciences (Epstein, 2008). These five strategies (when deployed correctly) have conclusive positive effects on students' behavior, at every grade level and age:

Get specific guidance on how to improve classroom management.

Since 2013 (the first year of NCTQ's ratings), there has been a 26% increase in programs requiring practice in evidence-based classroom management strategies.

This data does not include alternative certification programs. Percentages may not sum to 100 due to rounding.

Scores displayed for 2013 and 2016 are adjusted to reflect small differences between the current scoring system and the system used in the TPR's earlier editions.

One strategy, reinforcing good behavior with praise, stands out for the fact that it is the least likely to be taught and practiced–even though it has the most research behind its efficacy.

The graph above shows the percentage of programs that mandate practice and feedback on each strategy during clinical practice. This data does not include alternative certification programs. Percentages may not sum to 100 due to rounding.

Praising students for positive behavior is a powerful tool, yet only about a quarter of programs require it to be modeled. The state of Missouri, a leader in this space, opted not to include this strategy in its otherwise strong evaluation instrument mandated for use in the observation of teacher candidates. This lack of emphasis on praise may be a result of concerns that praise will reduce students' self-motivation to learn. However, research shows that when praise is used well, it not only improves student behavior, but it also increases student's self-motivation.

According to psychologist Daniel Willingham, the most effective praise causes children to change their own beliefs about themselves (Willingham, 2006). A student who struggles to maintain focus in class, for example, may feel he is destined to fail and may stop trying to do well in school. However, if the student's teacher can offer sincere praise for sustained effort on a project, the student will feel they can succeed in school and that their effort is worthwhile. Similarly, the work of Carol Dweck demonstrates that praising students for effort, not ability, can contribute to students' beliefs that their effort will result in success, increasing students' motivation and resilience (Dweck, 2002).

In contrast, when students are praised effusively for something they already can do or that represents less than their best effort, they do not gain the benefits of praise (Deci, 1999). At worst, excessive, unearned praise may feel like a kind of consolation prize, and students who receive it may think that their teacher doesn't believe they can improve, and internalize this belief. However, praise for behavior can be tremendously effective when teachers hold high expectations for their students and only praise exceptional acts.

In short, effective praise is highly specific, focuses on the student's actions, and targets a behavior that the student is improving.

States can leverage their oversight role by requiring approved programs to use only evidence-based observation instruments when program supervisors observe teacher candidates in action. 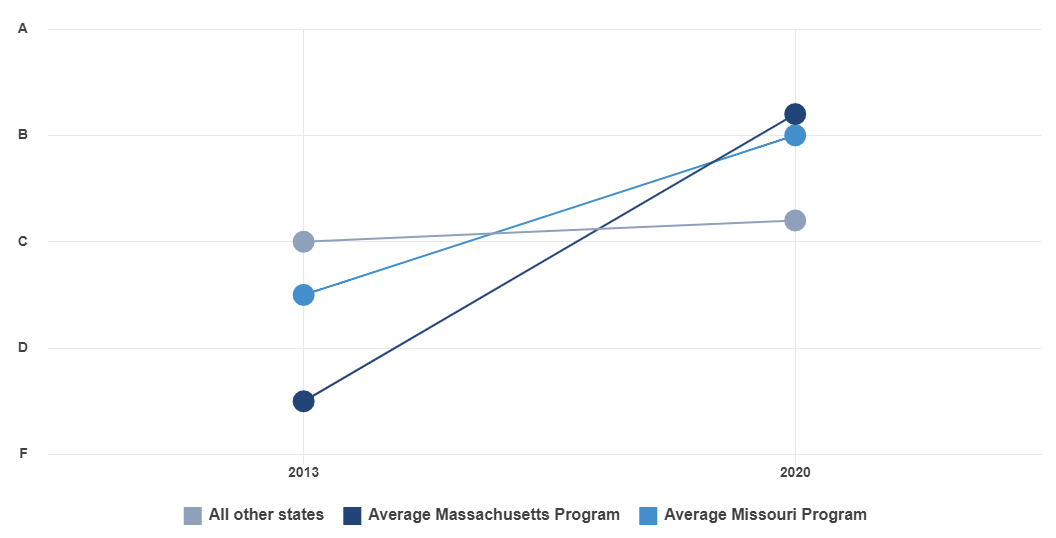 Since the Teacher Prep Review began in 2013, both Massachusetts and Missouri implemented required evaluation instruments, each of which requires the teacher candidate to model four of the five essential classroom management strategies. This resulted in all programs in these states qualifying for no less than a grade of B. (Massachusetts did not include the strategy of addressing serious misbehavior, and Missouri omitted the reinforcement of positive behavior.) No other state saw the kind of broad, systematic improvement in classroom management practice. Unfortunately, because the Missouri and Massachusetts evaluation systems each omit one of the five classroom management strategies, seven programs in the two states have lost the "A" grade status they earned in the previous edition of the TPR.

Many observation instruments popular with programs fail to incorporate some evidence-based classroom management strategies. The NIET TAP instrument is the only one that incorporates all five strategies.

Together, these instruments are used by 40% of all teacher preparation programs, with Danielson's Framework for Teaching by far the most popular. The remaining 60% of programs typically use evaluation systems designed by their faculty. Encouraged by requirements of CAEP and state accreditors, many programs are starting to discard 'home-grown' evaluation systems to shift to validated instruments. Still, the shift does not necessarily mean improved quality.

Percentages may not sum to 100 due to rounding.

The Teacher Prep Review includes a small, non-representative sample of 59 non-traditional elementary programs, as most elementary programs follow a traditional model. Somewhat over half of graded alternative programs and residencies (58%) earn an A or B, meaning they expect their candidates to demonstrate skill in all or nearly all of the five essential classroom management strategies.

Exemplar Resources You Can Use

Of the thousands of observation and evaluation instruments examined, these four instruments stand out as exemplary. Each is designed to ensure future teachers learn and practice the five universal classroom management strategies. These tools can serve as guidance for institutions looking to strengthen preparation in classroom management.

National Institute for Excellence In Teaching

University of Alabama in Huntsville

One hundred fifty-one elementary certification programs earned an A on this standard by ensuring that their teacher candidates practice all five essential classroom management strategies during clinical practice. Programs marked as "Consistently High Performers" received an A in every edition of the TPR in which they appeared. In addition, 38 traditional programs below stand out because they improved their scores on the Classroom Management standard from an F in the edition of the TPR when they were first evaluated to an A in 2020.

University of Alabama in Huntsville

University of Maine at Farmington

University of North Carolina at Pembroke

University of Pittsburgh at Bradford

University of Texas at Arlington

University of Texas at Austin

University of Texas at Dallas

University of Texas at El Paso

University of Texas at San Antonio

University of Texas at Arlington

University of Texas at San Antonio

Evaluation is based on the following data sources:

Programs are asked to provide the documents listed above. Once collected, a team of analysts verifies that all of the necessary documents are in hand for a program. Programs are evaluated only if analysts are able to identify and collect all relevant forms.

To be hired, the analysts who work on this standard must complete a rigorous assessment of their analytical ability which only 12% of applicants satisfy. Analysts do not begin officially rating programs until they are able to complete practice ratings with at least 90% agreement to the work of experienced raters. To ensure consistent interrater reliability, 20% of programs are randomly selected for a second evaluation, and scoring variances are periodically assessed. Analysts may be asked to complete additional training if scoring variances are greater than 10%.

With a full set of observation and evaluation instruments, analysts look for clear and precise references within each instrument to the five evidence-based classroom management strategies. These strategies are:

Program scores, converted to A-F grades, are based on the number of strategies referenced in either the observation and/or evaluation forms. An A means that a program's forms provide feedback on all five strategies. A B is four strategies, a C is three strategies, a D is two strategies, and an F is one or no strategies.

The examples below, taken from actual programs that were evaluated, show language that would and would not receive credit. However, credit is not based purely on the presence or absence of individual words. Context is always taken into account.

Full credit is given for the strategy "Maximizing Learning Time" if a program's evaluation instruments refer to two or more of the four sub-strategies in that domain (pacing lessons appropriately, encouraging student engagement, managing class materials, and managing the physical setup of the classroom).

Research shows that students learn more in a positive, orderly environment. For example, Skibbe and colleagues (2012) found that if students who have trouble inhibiting impulses distract other students, the literacy growth of the whole class will be reduced. Another study found that improving teachers' classroom management skills has a positive, statistically significant effect on students' academic outcomes (Kopershoek, 2016).

Two research summaries echo these findings and provide support for specific classroom management techniques. Meta studies conducted by Simonson and colleagues (2008) and by Epstein and colleagues at the request of the Institute for Education Sciences (Epstein, 2008), identified specific classroom management practices as having the strongest research support for their effectiveness. Although the authors of the two meta analyses frame their work in different ways, there is a great deal of overlap between their findings. The areas of overlap are detailed below and define the five strategies that are the focus of this standard.

Maximizing Learning Time
Both Epstein (2008) and Simonson (2008) find support for creating lessons that engage students and keep them actively involved in learning. Both authors also recommend arranging the layout of the classroom to minimize distraction and otherwise meet students' needs.

Reinforcing Positive Behavior
Of the five classroom management strategies emphasized in this standard, support is particularly strong for the use of specific praise, and other forms of positive reinforcement, to encourage appropriate behavior. Both Simonson (2008) and Epstein (2008) describe extensive research support for the use of specific, contingent praise and other forms of positive reinforcement. Additional evidence for the effectiveness of positive reinforcement is found in the work of Cook and colleagues (2017), Ferguson & Houghton (1992), and in additional research summarized by Hattie (2008). The parameters of effective praise were explored by Brophy (1981), who stated that praise should focus on genuine progress, should include a description of the action being praised, and should generally be given privately and in a natural tone. Dweck (2002) established that praising students for effort, not ability, can improve students' motivation and resilience. Other research points out that praise should be given only for genuinely good work (Deci, 1999).

Redirecting Off-task Behavior
Epstein (2008) advises teachers to ignore off-task behavior when possible, or to redirect it without disrupting the flow of instruction. Simonson (2008) describes research support for active monitoring of student behavior, which enables teachers to identify off-task behavior before it becomes a greater problem, and respond.

Responding to Serious Misbehavior
Epstein (2008) recommends that, when necessary, teachers provide respectful, appropriate, consequences for serious misbehavior. Simonson identifies research that supports the use of discrete, brief and timely response to student misbehavior, as well as other methods for addressing misbehavior such as token systems.

Other Practices
The IES meta analysis also noted that studies support other techniques including teaching students to self-monitor their behavior, involving families in behavior issues, and using school-wide behavior plans (Epstein, 2008). However, since these techniques are supported less strongly by research, and because they extend beyond what student teachers could reasonably demonstrate in a classroom observation, they are not included in this standard.

Get More Updates On Our Research