My book group just finished a fascinating new history of the women's suffrage movement, leaving us all just a little embarrassed by our ignorance. As hard as it may be to believe now, the fight to earn women the right to vote took an army of women seven decades to achieve, only to find success at the eleventh hour when the last possible state (Tennessee) ratified the 19th amendment by a single vote—and that vote was only secured when the mother of the legislator-in-question reamed him out a few hours beforehand. Vitriol, sexism, and hate speech were as omnipresent then as anything we experience now, much of it by women to women. The movement only succeeded because of a highly sophisticated level of organization and deft, courageous leadership capable of balancing many warring factions within the movement itself—without the wheels coming off the bus. Sadly, though, none of the women who started the movement lived to cast a vote, all dead long before the 1920 ratification.

It got me thinking about what it really takes to achieve fundamental change in areas such as human rights, climate change, and, indeed, improving an education system. Do we have anywhere near that level of patience? We, and I certainly include myself here, have a tendency to think that all it takes to change minds and hearts is to have the facts on our side, a few good stories, and a top notch communications strategy. If only it were that easy.

Until recently, a lot of energy (and money) was poured into teacher quality, and appropriately so. New research had, for the first time, quantified the impact of great teachers, showing that their impact on students can be measured over a lifetime. This gave rise to a national movement. We were able to lay down a blueprint for tackling workforce challenges and many of the ill effects of poverty and racism, if only schools found a way to consistently put more great teachers in the classrooms where they're needed the most.

After a decade of unprecedented activity leading to waves of new laws and regulations to better measure and deploy teachers, the movement hit a wall. Look at what has happened in the last several years. 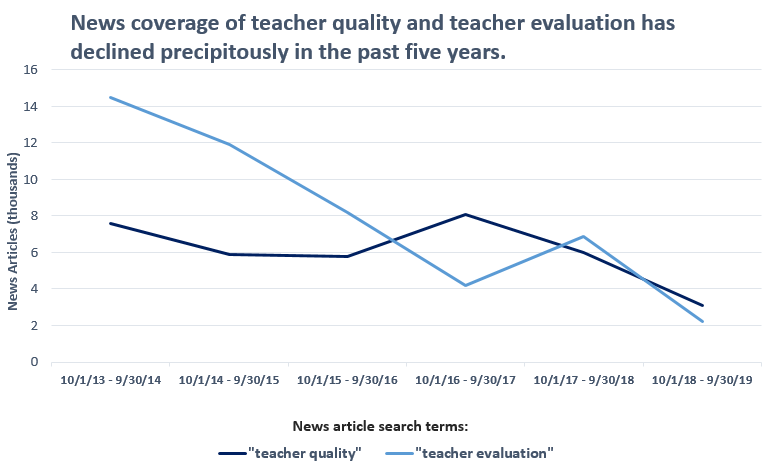 A search on these two terms "teacher quality" and "teacher evaluation" reveals about a 75 percent drop in press coverage—a reasonable proxy, we would assume, for public attention to these issues.

More damning than this evidence are the actions taken by 23 states, throwing out new policies for measuring teacher performance which hadn't been faithfully implemented, though all were grounded in good research. A complete capitulation to the status quo if there ever was one.

This retreat didn't happen because new research findings identified newer, better antidotes to various social challenges. In fact, the ideas that 'usurped' teacher quality (e.g. social-emotional learning, blended learning) are important and worthy, but they face a less certain future. The evidence for them is not yet strong.

As someone who is in the thick of it, I may not be the best person to opine on why it happened (and I run the risk of people thinking I am just pouting). There's been lots of theories: people couldn't stand the heat; funders wanted to give their money away without being labelled "anti-teacher;" the unions were too powerful; the ed reformers overshot, going too far, too fast. All of those things are at least partially true.

But I look back to my sisters of a century or more ago, who fought a lot harder for a lot longer, and think we've all been a bit too quick to declare defeat. There were many times in their seven-decade pursuit of something so obviously right that those women had to have felt that the momentum had been lost, that their efforts were for naught.

For teacher quality, this period too is a lull, not a permanent setback.

No matter how daunting change can be, when something's founded on unassailable evidence and speaks to shared values of justice, fairness, and equity, it generally finds a way. It's just never as fast as any of us would want to see. The push to strengthen and deploy the power of the teaching profession will prevail.