Back in 2007, the National Center for Education Statistics began collecting data for a study that would, for the first time, give us better data on new teacher mobility. This is a big deal because most studies lose sight of a teacher once she moves out of the study's district or state—with the result that retention rates have been misreported for years.

The Beginning Teacher Longitudinal Study follows the same group of teachers for five years, regardless of where they live—even if they leave a state. The headline finding was that only 17 percent of new teachers leave after the first four years (the gray areas in the graph below). That's a far cry from the oft-repeated education myth that 50 percent of teachers leave within their first five years. 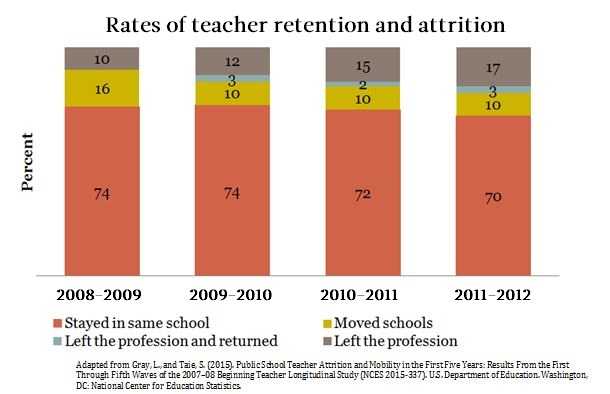 But there are other intriguing findings that haven't received as much attention in mainstream news.

It's also worth noting that teachers who entered through an alternative pathway had an attrition rate of about 21 percent compared to 16 percent for traditionally certified teachers (after four years)—clearly not as large a gap as is often suggested.

The surprising similarity in attrition rates reported for teachers who had been working in different kinds of schools also caught our attention. After four years, there was almost no difference in the attrition rates of teachers who began their careers in a city or suburban school (17.2 percent) and those who began teaching in a small town or rural school (17.5 percent). Likewise, those who started teaching in schools above 50 percent free/reduced lunch rate had an attrition rate of about 19 percent—again only a bit more than the 16 percent rate that was reported for teachers in schools below that line.