Tenure serves as a key milestone in a teacher's early career. Tenure status can play a role in multiple aspects of a teacher's career, from observation and evaluation processes to her rights and status during layoffs or dismissal. The decision to award a teacher tenure happens at the school or district level, but the state decides the process. This month the District Trendline examines state policies for teacher tenure, with particular attention to those states that changed their policies in the last decade or so to require teachers to show evidence of effectiveness in order to earn tenure.

Most states have teacher tenure

There are 45 states that have articulated a clear set of policies for teachers in order to earn tenure or to be considered non-probationary.[1] Four states—Florida, Kansas, North Carolina, and Wisconsin—have functionally eliminated tenure for teachers, while the District of Columbia and North Dakota do not have policies addressing tenure, leaving the decision of tenure up to the districts.

Of the 45 states with tenure policies, only 22 have any sort of explicit performance requirement that a teacher must meet in order to earn tenure or non-probationary status. 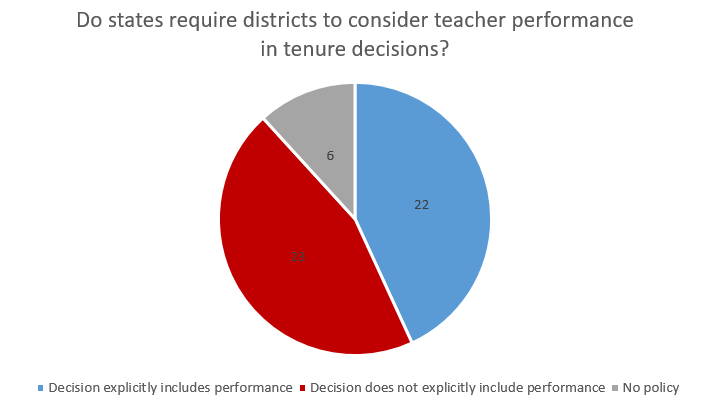 Among the 22 states that require performance as a criterion for tenure, Alaska, Oklahoma, and Wyoming require teacher evaluation ratings to be considered, but these states do not require objective measures of student growth to be factored into teacher evaluations. Another 18 states tie teacher tenure decisions to the teacher's evaluation rating, and objective measures of student growth are included. Delaware has a unique policy, requiring that teachers show "two years of satisfactory student growth evidenced by satisfactory ratings in the student improvement component of the teacher appraisal process within a 3-year period."

In most states, tenure is awarded after three years

Tenure status is typically awarded after a teacher's first few years in the district. Considering teachers learn and improve substantially in their early years, tenure decisions may come too early in a career for the collection of adequate data to accurately reflect teacher performance. 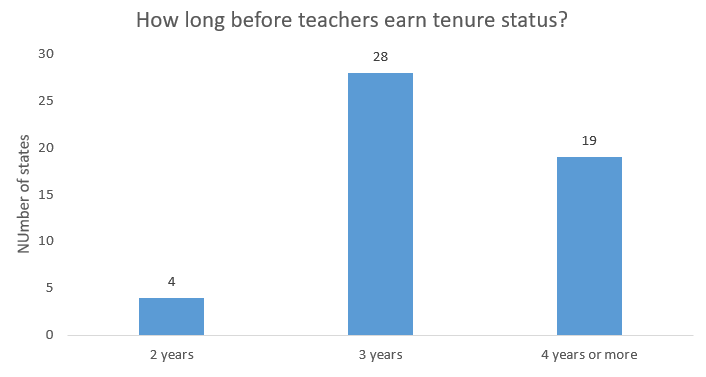 A few states allow for flexibility around the timing of the tenure decision. In Washington, the typical probationary period is three years, but a teacher may be granted tenure after the second year if she receives one of the top two evaluation ratings. Similarly, in Oklahoma, tenure decisions can be made after either three or four years, depending on a teacher's evaluation ratings. Virginia specifies that school districts can determine the length of the probationary period, between three and five years. Of the six largest school districts in Virginia, which are included in the NCTQ Teacher Contract Database, only Chesterfield County Public Schools has a five-year probationary period. The others have stuck with the state minimum of three years.

As states consider how to curate a quality teacher workforce with professionals who are supported and encouraged to grow in their practice throughout their careers, a key lever is ensuring that a teacher's effectiveness in the classroom is considered for decisions such as tenure or licensure advancement.

[1] Some states, such as Colorado, award teachers non-probationary status rather than tenure (the high court in Colorado recently ruled that this is not the same as tenure as it applies to due process rights). However, state policies regarding tenure and non-probationary status will be considered as equivalent for the purposes of this analysis.