It's hard to believe today is the 11th anniversary of the 9/11 terrorist attacks.  Like most people, I think back to where I was that day and remember it with a heavy sadness.  The confusion and terror of the day were hard to deal with as an adult, and for those leading classrooms, the challenge was unimaginable.

It's easy to forget that teachers are asked to be "first responders" for students in times of crisis, among their many other duties.  I asked colleagues about their experiences in the classroom on 9/11 and there were two themes among the responses from coworkers who were high school students at the time and from former teachers.  Teachers who knew of a protocol said the day went as practiced. For those with less of a routine, there was confusion about how much information to share, especially for kids whose parents or other family members might be in harm's way.  Importantly, teachers mentioned thoughts of their own children who might be coming home to an empty house while they stayed at school to look after their students.
For colleagues who were high school students at the time, their experiences seemed to turn on access to information.  Here's what Maegan had to say, 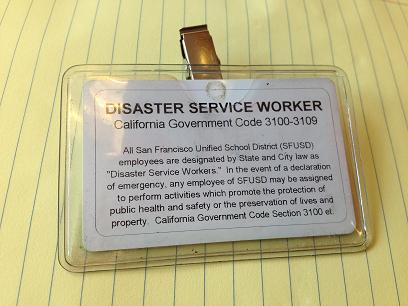 "When the attacks happened I was in Creative Writing. . . I was impressed with the way my teacher adapted the day's lesson.  He explained that this event could possibly be the most influential event in our lifetime.  He allowed those of us that were comfortable to stay in the classroom, watch the news, ask questions, and write a stream of consciousness journal entry. . . . As I look back 11 years later, I am grateful to that teacher that allowed me to watch those events in real time and am impressed with his adaptability at incorporating current events into his lesson plan.  I still have my journal entry from 9/11/01."

There were a lot of heroes at work that day -- fireman, policemen, flight attendants, pilots, teachers and many others.  They were the same people who helped my generation through the attempted assassination of a president, the major California earthquakes, the Challenger disaster and the bombing of the federal building in Oklahoma City.

As hard as these events are to remember, they can serve as a reminder to all educators to plan in advance for emergencies.  Words cannot express how much I hope teachers won't have to play the role of first responder in a crisis again.  But I hope they are prepared.  Prepared with a plan to communicate with children and parents. Prepared with plans to make sure their own families are cared for until they can get home.  And prepared to come back the next day.