This month's issue looks at the strategies that Tr3 districts are pursuing to improve chronically poor-performing schools--using federal funds available through the School Improvement Grant (SIG), districts can implement the following improvement models:

Districts set policies specifically for these schools by negotiating them into teachers' contracts, using contract waivers, or creating rules for issues not covered in contracts. Here's what our data shows about the strategies being implemented: 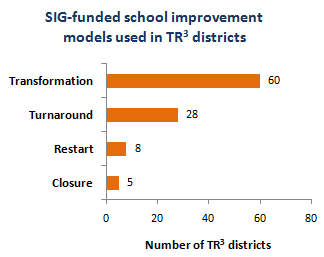 Philadelphia allows for the largest extension of the teacher day and year: one hour a day, along with up to two Saturdays a month and 22 days in July for additional teaching and in-service training. Fresno, Miami-Dade, and Guilford (NC) allow their schools to extend the year by ten days. Targeted Boston schools can add an hour to the teacher day, making it one of the longest daily extensions.

Milwaukee, Charlotte-Mecklenburg, and Prince George's County (MD) only state that their targeted schools need to figure out how to increase instructional time without extending the teacher work day or year. 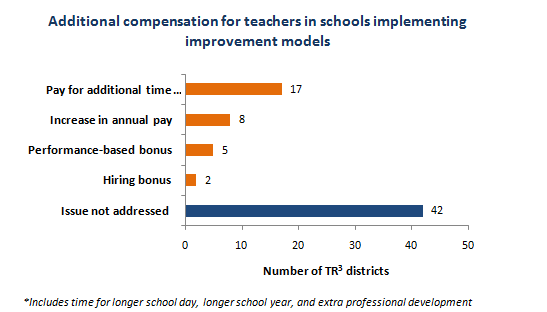 Pittsburgh has one of the most generous compensation packages, giving teachers in targeted schools $12,200 more each year than their peers in traditional schools. New York gives teachers 15% more than their normal salary (for up to two years).

Some districts provide a variety of supplemental pay for teachers who work in targeted schools. Boston automatically increases participating teachers' base salary by up to 5% and also provides additional compensation for working longer days and taking part in extra professional development. Similarly, in Oakland, teachers receive both additional compensation on a separate salary schedule and are paid for working longer hours than normal.

Go to Tr3's custom report page to access all the data we use in Tr3 Trends and to compare teacher policies in 113 school districts nationwide. Send feedback to gmoored@nctq.org.