While still not quite a majority of states, consider the lay of the land just two years ago.  In 2009, NCTQ's analysis concluded that fully 35 states did not, even by the kindest of definitions, require teacher evaluations to include any measures of student learning. Only four states could be said to be using student achievement as a significant factor in how teacher performance was assessed, again, using even a generous interpretation. 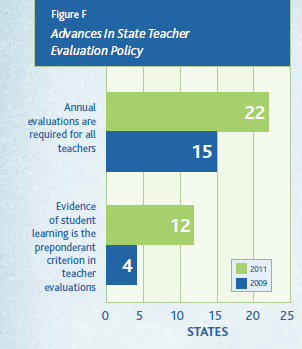 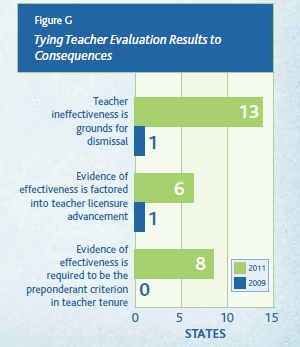 While it is still the case that the vast majority of states—39 in all—still award tenure virtually automatically, eight brave states (Colorado, Delaware, Florida, Michigan, Nevada, Oklahoma, Rhode Island and Tennessee) have set their sights higher, deeming that teachers should demonstrate that they are effective in the classroom before being awarded permanent status. Four more—Illinois, Indiana, Massachusetts, and New York—require that some evidence of student learning is considered in tenure decisions.

Still a relatively small number of states, true, but looking back again to 2009, NCTQ found not a single state that awarded tenure based primarily on teacher effectiveness. Just two years ago, only New York suggested in statute or regulation that persistent ineffectiveness in the classroom could be considered grounds for dismissing a teacher. In 2011, 13 states now have such a policy on the books.

For more, download the Yearbook  report for any of the 50 states and the District of Columbia or a national overview of state performance and progress.