A few weeks ago we conjectured a relationship between the districts applying for Race to the Top grants and their union strength. It would seem that the veto power unions essentially had in the process would be insurmountable to both the unions and the districts.

We used Fordham's union strength rankings as a proxy for local union strength (not perfect, but more suggestive than relying on the states' right-to-work status, and less time consuming than surveying the 1189 districts that applied). A quick first glance at this issue reveals almost nothing. 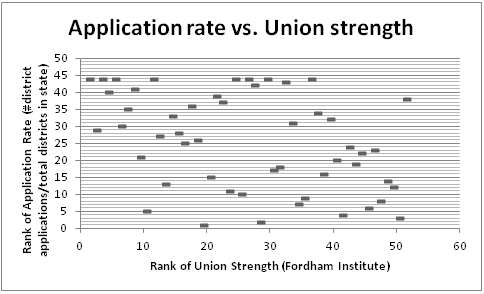 On the other hand, what did emerge is a potential relationship between application rates within states and states that had already been Race to the Top winners. There were 5 states where more than a quarter of the districts in the state applied--three of those were Race to the Top winning states, and two of those were the two round one RttT winners, Delaware and Tennessee. Delaware had a whopping 91 percent of its districts apply (29 of 32).

Disclaimer: some districts applied as members of a collaborative, so the high participation states may have large consortia.

Within the subset of states that have won Race to the Top grants, the average application rate for districts was almost 19 percent. Of the non-RttT winning states, the application rate was only a little more than 8 percent.