Teacher evaluation systems, when implemented well, are coinciding with real and measurable benefits for students and teachers alike. That's not just a theory, but a fact, as a new study from NCTQ shows. We highlight four school districts (Dallas, Denver, D.C., and Newark) and two states (New Mexico and Tennessee) that are achieving measurable success through their evaluation systems.

Over the last decade, as many districts and states announced their intention to install better evaluation systems, the inevitable political and operational challenges often proved to be greater than the resolve to make the shift. These six highlighted systems—and perhaps others which are still to be surfaced—should provide some much needed new energy for this keystone reform.

Underpinning all of these evaluation systems is an effort to provide a more meaningful and realistic measure of the distribution of teacher talent than such systems produced historically, when virtually all teachers received the same rating. For example, New Mexico's teachers earn evaluation ratings that are widely-distributed across its evaluation rating categories, with nearly 30 percent of teachers earning ratings below effective in recent years. This enables New Mexico to differentiate the supports that are made available to teachers to improve their practice.

Denver Public Schools was part of the 2009 TNTP report, The Widget Effect, which found that virtually all teachers were rated satisfactory. Compared to a decade ago, Denver's teacher ratings are now much more distributed across the spectrum. 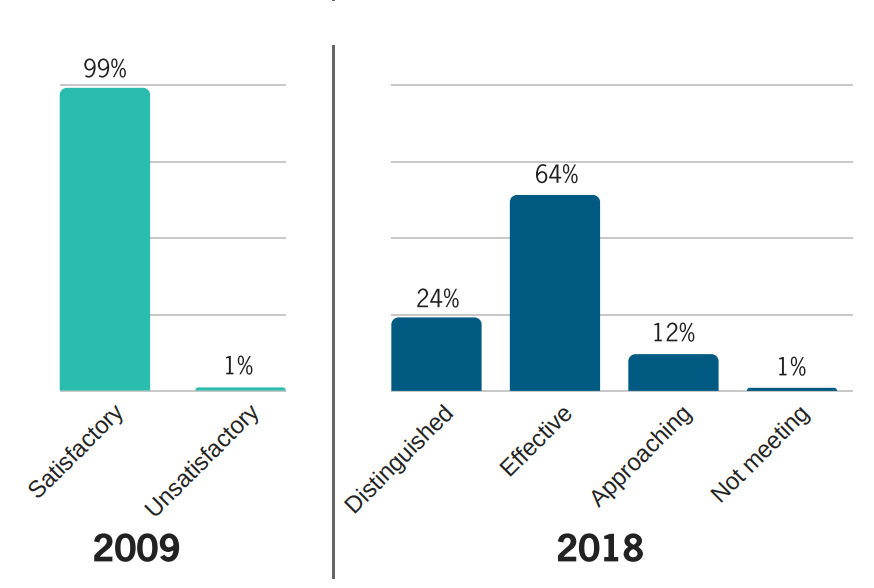 What does it take to achieve this level of differentiation in these evaluation systems?

Evaluation system success is a result of adherence to core principles

While these core principles were prevalent in the states and districts highlighted in this study, we also know that their application is much more uneven in other school systems. Data from the Teacher Contract Database and the State Teacher Policy Database report the formal policies:

Perhaps most significantly, each of the six systems to some degree links a teacher's evaluation results to opportunities to earn additional compensation. For example, D.C. Public Schools teachers who earn a rating of highly effective, teach in a targeted high-poverty school, and meet other criteria are eligible to earn as much as $25,000 in bonuses each year (in addition to the opportunity to move faster up the salary schedule).

In addition to there being real consequences to the results of an evaluation, we found a consistent commitment to assessing and improving their systems. System leaders gathered feedback from teachers, principals, and other stakeholders; analyzed the data they had gathered; and used this information to identify weak points and refine their systems. These systems also demonstrate evidence of leadership committed to these systems, even as five survived turnovers at the highest levels.

These six systems are seeing substantial benefits from their investment in teacher evaluations. The most immediate impact is on the retention of better teachers and an increased departure rate among weaker teachers.

Ultimately, well-designed and well-implemented teacher evaluation systems help all teachers improve. Independent researchers in Tennessee have found that teachers in the state are improving at a faster rate, with growth that is "much more rapid and sustained" since the implementation of its new evaluation system.

What about the impact on student learning?

Some efforts, notably in Dallas, D.C., and New Mexico, can report clear evidence of improvement in student learning. For example, students in D.C. Public Schools have made significant gains on the NAEP assessment since 2009, concurrent with its implementation of the new evaluation system. Student proficiency in Dallas increased more steeply from 2015 (when its system was put in place) to 2017 than across the state of Texas. New Mexico's students are demonstrating increased proficiency under implementation of its evaluation system, with 11,000 more students on grade level in math and 13,000 more students reading on grade level in 2018, as compared to 2015. These gains are promising, although they cannot be tied directly to the evaluation systems without a controlled study.

Evaluation is not a silver bullet that will automatically improve teacher effectiveness and student outcomes. But as the examples highlighted in this study illustrate, with careful implementation and a commitment to build upon what works and remedy what does not, an evaluation system can be an essential tool in state and district efforts to ensure that every student has access to effective teachers.

For more detail on how each of these six systems implemented its evaluation system, overcoming the inevitable obstacles, and built buy-in among their teacher corps, you can read the full report here.