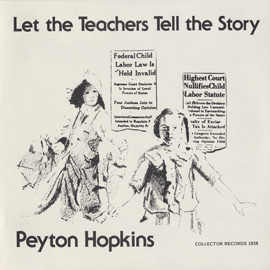 The power of song. Surely you know about the role of music and the Civil Rights Movement, and maybe even the role of singing in the fall of the Iron Curtain in Estonia, Latvia and Lithuania. But what about music and the education labor movement?

We recently came across a Smithsonian Folkways album released in 1986 titled, Let the Teachers Tell the Story. While lefty, pro-union sentiments are not hard to find in this trove of Woody Guthrie and Pete Seeger albums, this recording struck a chord (pun intended).

On Let the Teachers Tell the Story, folk singer Peyton Hopkins sings not just about the teachers in front of the classroom, but cafeteria workers and a janitor who "waltzes her broom like a homecoming queen." Songs advocate for pay equity, decent working conditions and quality education. Hard to argue with any of these sentiments, surely.

But unfortunately in 2012 our students and schools are grappling with many of the same challenges as when this record came out (three years after the publication of a Nation At Risk). While some unions have shifted their focus away from protecting teachers at the cost of students, more movement is needed in that direction.

Maybe it's time for a new kind of folk song.