Without first understanding a problem, it's next-to-impossible to fix it. A new policy brief demonstrates how one state looked first to data to better understand its schools' inequitable assignment of teacher talent, surfacing some issues that were largely unknown.

This research from James Cowan, Dan Goldhaber, and Roddy Theobald (AIR) showed that low-income students are half as likely as their higher-income peers to be assigned to a teacher considered to be effective, as measured by Massachusetts's teacher evaluation system. This finding is hardly revolutionary--Goldhaber has written on this topic before, and Massachusetts' own ESSA plan identified existing educator equity gaps within the state. What is relatively new is this brief's exploration of potential sources of these inequities.

The researchers found that outsized differences in teacher effectiveness between districts--and not variations between schools within the same district--are in fact the biggest drivers of low-income students' inequitable access to the best teachers. 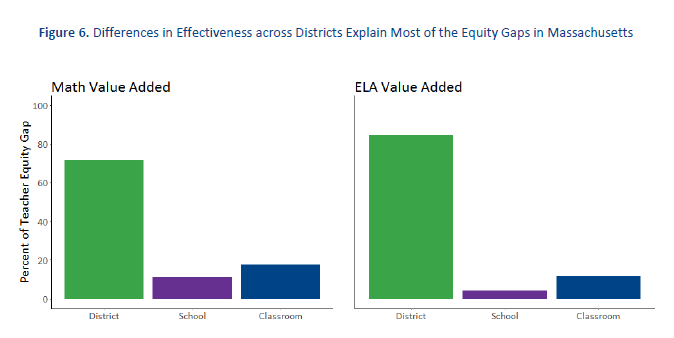 The next biggest gaps were within schools, or at the classroom level, highlighting the importance of data collection at the individual student level, rather than just at the school level, for states aiming to improve access to teacher talent. For example, only classroom-level data can uncover whether a disproportionate number of low-income students in a given school are taught by an ineffective teacher as compared to their higher-income classmates down the hall. Unfortunately, NCTQ analyzed states' proposed plans under ESSA and found that only four states included plans to collect data at that level.