In this significant, not to mention prodigious new study, Stanford and Princeton economists (Brad Larsen, Ziao Ju, Adam Kapor and Chuan Yu) dive head-first into 17 years of often arcane state certification requirements—not just courses and tests, but various fees, screening for moral character, chest X rays, etc., etc. They seek to learn if more "stringent" licensing requirements (meaning more of them) seem to lead to a higher caliber teaching force—and if, by setting more requirements, states lose more than they gain by turning off those who decide a teaching career isn't worth all the hoop jumping. The researchers were particularly interested if stringent requirements dissuade more academically capable prospects, as well as those who could achieve higher earnings elsewhere.

Lo and behold, it turns out that stricter certification requirements do appear to pay off—but not for the reasons that have all that much to do with what happens inside a college of education. In fact, it appears that states' requirements of academic coursework taken outside the college of education are by far the most likely to raise the caliber of who enters teaching (see chart below). In other words, it is the coursework covering the material teachers have to teach that provides a more effective screen and not the requirements for pedagogical training.

The impact of seriously more stringent requirements (as measured by a one standard deviation increase in the licensing stringency) is "economically meaningful," assert the researchers, which basically means policymakers are well-advised to pay attention. If policymakers care about attracting the strongest possible applicants, then ramping up coursework in science, history, math, etc. may make sense. Notably, the benefits are substantial for secondary teachers, while the results for elementary teachers are inconclusive.

How licensing requirements benefit teacher quality is also interesting. The more stringent requirements significantly raised the quality of the teaching prospect at the lower end of the distribution of academic skills without serving as deterrence to those who might consider teaching at the upper end—upending many economists' primary argument against teacher certification measures. Importantly, though the results indicate that fewer prospects from the least selective colleges end up qualifying, there is no evidence of an adverse impact on diversity—yet more evidence added to our own recent findings that selectivity and diversity are not incompatible.

There's a ton yet to unpack from the certification data this effort amasses (and an open invitation to other researchers to have at it), but it feels good to inch past the ages-old debates over teacher certification, specifying just how states can positively influence who does—and who does not—end up in the classroom. 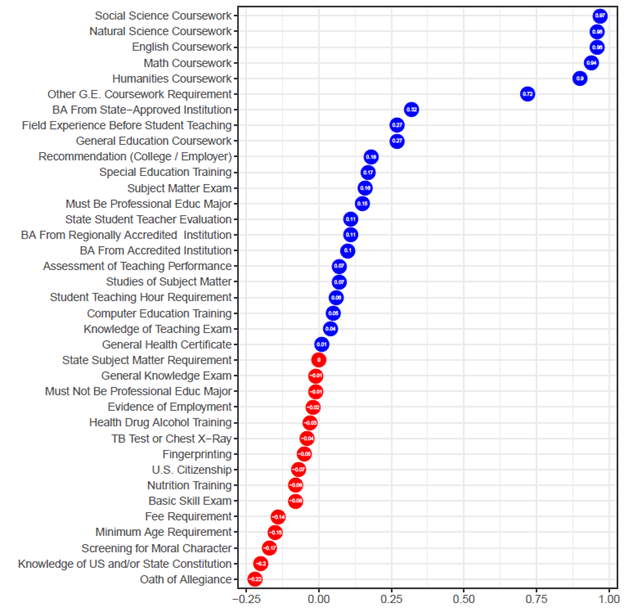 Course requirements for secondary teachers, including social science, natural science, English, math, and humanities are most positively correlated with higher teacher quality. Other factors like student teaching, a subject matter exam, and special education training are positive, but less strongly correlated with teacher training requirements. Not surprisingly, a number of common dimensions turn up little to no correlation, such as evidence of employment, oath of allegiance, minimum age, and fee requirements.