Districts report the most difficulty not only filling STEM and special ed vacancies but keeping them filled with strong, effective teachers. Given these shortages, what can districts do to recruit and retain a strong STEM workforce? This month, we're highlighting three essential strategies: recruit teachers with strong content knowledge, take advantage of career changers, and use pay strategically.

For secondary math teachers, the certification structure and licensing test in most states is generally a straightforward process districts can trust: candidates need to have majored or completed a graduate program in mathematics or math education and must then pass a content knowledge test. (Eight states deviate from this structure, allowing some teachers into the classroom without passing a licensing test.[1])

Science teachers are another story, meaning districts should be far less confident in the expertise represented by some teachers' certifications. That's because in most states science teachers can pursue "single-subject certifications," which allow them to teach only one subject area (e.g., chemistry or biology), or they can pursue a "multiple subject certification" (e.g., general science) which allow them to teach any number of different science subjects–even at the high school level. While ten states do not allow a multiple subject certification in science (Arkansas, Florida, Kansas, Kentucky, Massachusetts, Minnesota, Mississippi, New York, Tennessee, and Virginia), in all other states, districts need to understand the problems with the general science certification.

While a general science certification gives districts and school principals greater flexibility–something which is particularly helpful when science teachers are hard to find–the teacher may not have the expertise that the district assumes. That's not fair to the teacher or to students.

Districts should be aware that teacher prep programs take different approaches to preparing general science candidates. Most do a great job, but some don't. One of the weaker programs allows someone to earn a general science certification with only 28 credits in science, which is fewer credits than a standard college major, and almost all coursework is in a single subject (Biology).[2] This program is not alone in requiring so few credits. While about 73 percent of undergraduate programs and 25 percent of graduate programs require adequate coursework for general science certifications, the rest fall short.

This list makes it easy to review how well the programs NCTQ looked at prepare candidates in general science, sorted by states.

The most efficient way to confirm that general science teachers know enough about all of the subjects they will teach should be that they've passed the state's licensing test–but most states aren't using tests that can give districts the confidence they want. In fact only Missouri requires general science candidates to independently pass a test in each subject they'll be licensed to teach. No other state offering a true general science certification has a similar test.[3]

Teaching is often a second career for many professionals. To take advantage of career changers in the science and mathematics fields, their pay should reflect previous work experience that is relevant to the subjects a teacher will be assigned. This includes prior teaching experience, but should also include other relevant work experiences to broaden the pool of people who might be willing to make the career switch. There's a big difference between starting on the first salary step and starting on the tenth! For example, a new chemistry teacher in New York City who had previously had a career as a chemist can receive up to 10 years of credit for her prior career, increasing her starting base salary by over $13,000.

Among large school districts, about 60 percent recognize previous relevant work experience in some way.[4] Specifically regarding science and math teachers, two districts (New York City and Orange County (FL)) explicitly mention prior science- and math-related work experience in their policies. In contrast, 55 districts have restrictive policies that prevent extension of the starting salary adjustment to science or math teachers. Click here to see a full description of each district policy. 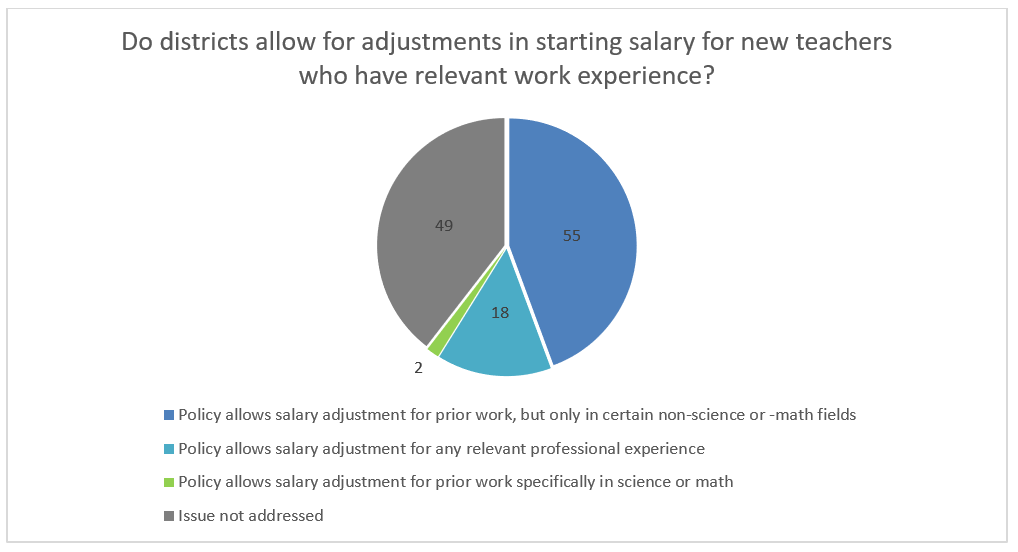 In addition to taking advantage of career-changers, districts should consider offering retired former STEM professionals the option of teaching part-time in order to fill vacancies.

States can also play a role here. The state of Georgia places secondary math and science teachers to the salary step on the state salary schedule that is applicable to six years of creditable service (an additional bonus of about $4,500 for a first year teacher). A recent study of the program found that it boosted retention rates for math and science teachers between 18 to 28 percent. 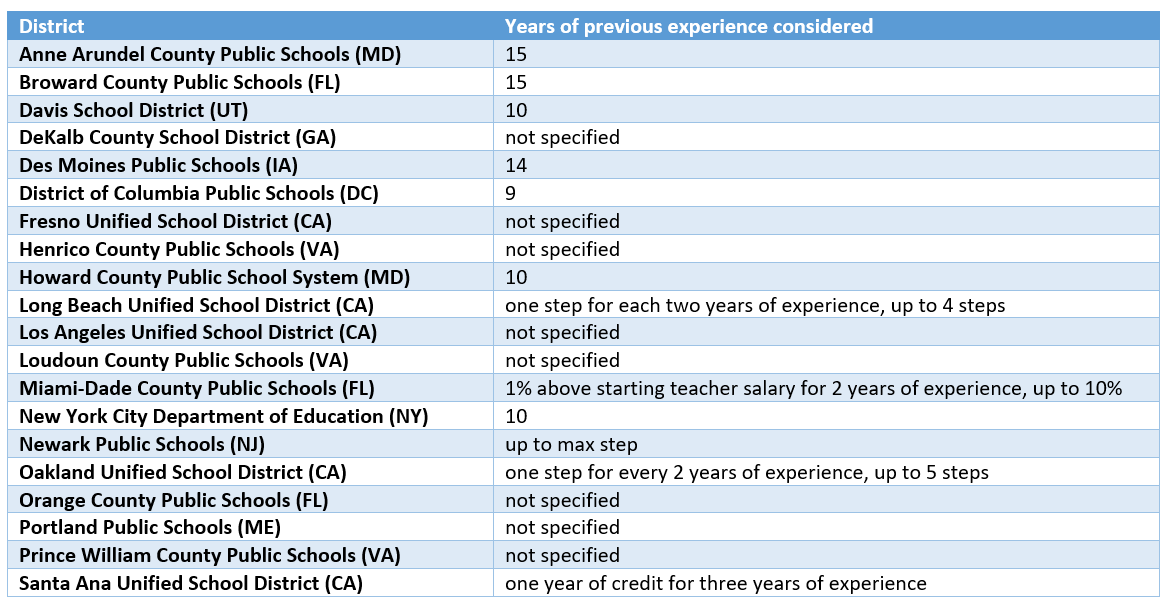 Secondary science and math assignments are often some of the most difficult classrooms to fill, due in some part to the high private sector salaries many math and science majors must pass up to enter teaching. Using pay strategically to attract and reward teachers in those positions can help.

Nearly two-thirds of large districts (80 districts) purport to offer some additional pay to teachers working in high-need subjects. While most of these districts use broad language to define who earns the additional money (such as "critical shortage areas" or "hard-to-fill subjects"), 21 districts specifically designate science and/or math.

Among the 21 districts that explicitly mention science and/or math as a high-need subject, most offer one-time signing bonuses or annual stipends (see table below). The amount of annual stipends has a broad range. For example, in Duval County (FL), secondary math and science teachers earn supplements of $2,500 to $5,000 a year, but secondary math and science teachers only earn supplements up to $990 in North East Independent School District (TX).

There are four districts that use methods beyond an annual or signing bonus. Math teachers in Charleston (SC) and Douglas County (CO) are paid on separate, higher salary schedules. In Davis School District (UT), new math teachers get placed a step higher on the salary schedule than their experience warrants. In New York City, in addition to an annual bonus for teachers working in hard-to-staff areas in designated high-need schools, experienced secondary math and science teachers earn a $5,000 housing stipend plus an additional $400 per month. 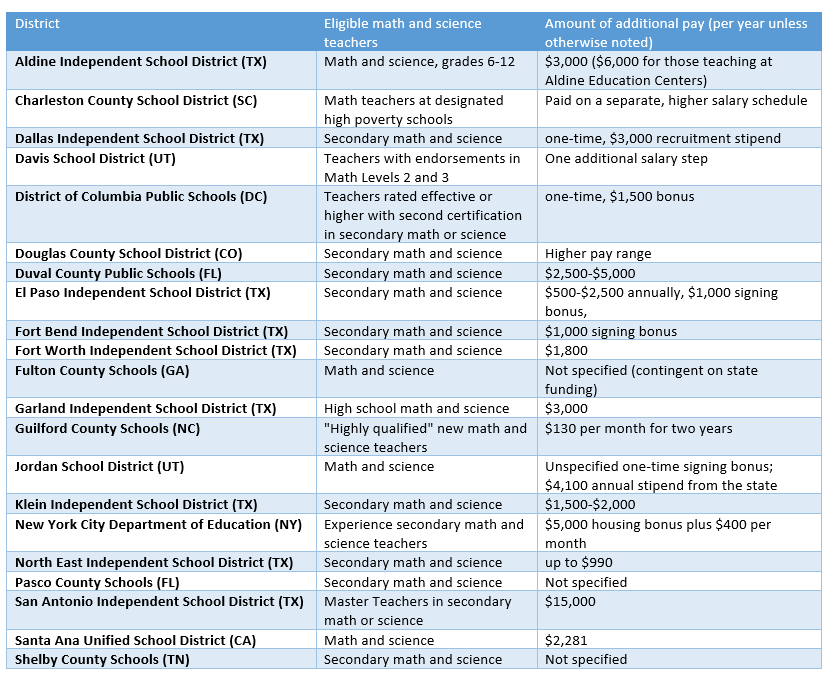 There are two keys to fully leveraging strategic pay to attract and retain math and science teachers: the additional pay must be significant enough that it persuades someone to consider a job they might not otherwise consider and it should be connected to the needs of the district.

An example of a district considering both of these ideas can be found in Aldine (TX). Secondary math and science teachers earn an additional $3,000 per year, but the district really sweetens the pot if the teacher is willing to work in one of its alternative education schools providing up to $6,000 more per year.

Of course, districts should implement and study bonus programs, collecting data and assessing if the amounts are successfully attracting and retaining teachers. For a more detailed analysis of how districts are using strategic pay, check out this post.

Want to learn more? Check out our resources!

Teacher Prep Review: Find the teacher preparation programs near you that do the best job at preparing future STEM teachers.

How are districts using pay to staff high-need schools and subjects?: Read more about districts' strategies to attract teachers to where they're most needed.

[2] University of the Southwest in New Mexico.

[3] Arizona, California, Connecticut, Rhode Island, and West Virginia limit teachers' instruction under this general certification to fundamental science courses, and so their licensure testing is adequate.