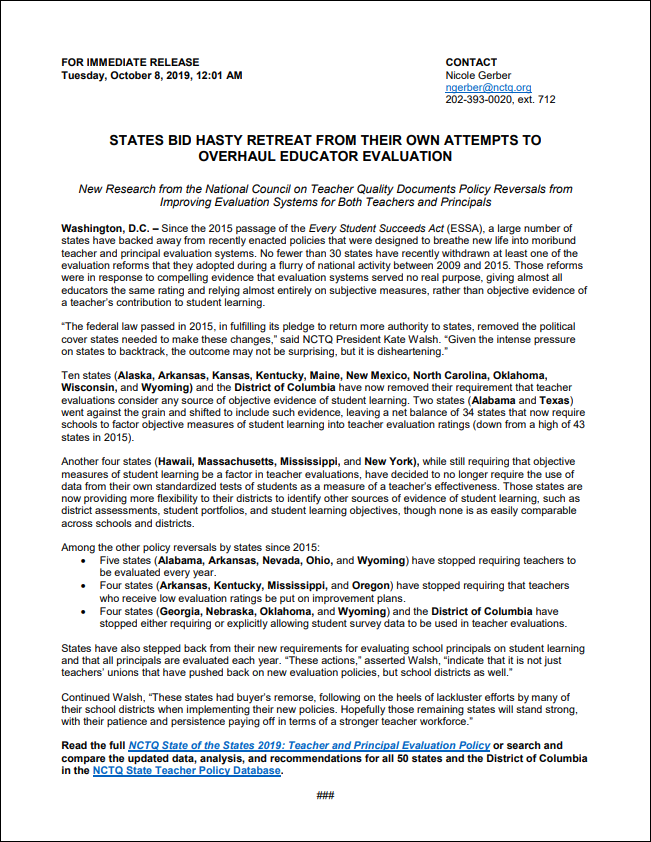 Washington, D.C. – Since the 2015 passage of the Every Student Succeeds Act (ESSA), a large number of states have backed away from recently enacted policies that were designed to breathe new life into moribund teacher and principal evaluation systems. No fewer than 30 states have recently withdrawn at least one of the evaluation reforms that they adopted during a flurry of national activity between 2009 and 2015. Those reforms were in response to compelling evidence that evaluation systems served no real purpose, giving almost all educators the same rating and relying almost entirely on subjective measures, rather than objective evidence of a teacher's contribution to student learning.

"The federal law passed in 2015, in fulfilling its pledge to return more authority to states, removed the political cover states needed to make these changes," said NCTQ President Kate Walsh. "Given the intense pressure on states to backtrack, the outcome may not be surprising, but it is disheartening."

Ten states (Alaska, Arkansas, Kansas, Kentucky, Maine, New Mexico, North Carolina, Oklahoma, Wisconsin, and Wyoming) and the District of Columbia have now removed their requirement that teacher evaluations consider any source of objective evidence of student learning. Two states (Alabama and Texas) went against the grain and shifted to include such evidence, leaving a net balance of 34 states that now require schools to factor objective measures of student learning into teacher evaluation ratings (down from a high of 43 states in 2015).

Another four states (Hawaii, Massachusetts, Mississippi, and New York), while still requiring that objective measures of student learning be a factor in teacher evaluations, have decided to no longer require the use of data from their own standardized tests of students as a measure of a teacher's effectiveness. Those states are now providing more flexibility to their districts to identify other sources of evidence of student learning, such as district assessments, student portfolios, and student learning objectives, though none is as easily comparable across schools and districts.

States have also stepped back from their new requirements for evaluating school principals on student learning and that all principals are evaluated each year. "These actions," asserted Walsh, "indicate that it is not just teachers' unions that have pushed back on new evaluation policies, but school districts as well."

Continued Walsh, "These states had buyer's remorse, following on the heels of lackluster efforts by many of their school districts when implementing their new policies. Hopefully those remaining states will stand strong, with their patience and persistence paying off in terms of a stronger teacher workforce."

Read the full NCTQ State of the States 2019: Teacher and Principal Evaluation Policy or search and compare the updated data, analysis, and recommendations for all 50 states and the District of Columbia in the NCTQ State Teacher Policy Database.


###
About the National Council on Teacher Quality: The National Council on Teacher Quality is a nonpartisan research and policy group, committed to modernizing the teaching profession and based on the belief that all children deserve effective teachers. We recognize that it is not teachers who bear responsibility for their profession's many challenges, but the institutions with the greatest authority and influence over teachers.
View all press releases