In 2018 NCTQ completed the collection of attendance data for 30 of the largest school districts in the nation, which included in all cases detailed information on teacher absences for the 2016-2017 school year, and in some cases detailed information on the absences of the central office staff of the district. In a few cases we also received 2015-2016 attendance data. All the data used anonymous unique identifiers for teachers and central office staff.

The specific information provided by each district included:

1. A teacher roster with:

a. Teacher ID (anonymous code)
b. Tenure status where applicable
c. Years of experience
d. School name
e. Percentage of the student body in each school that receives free and reduced lunch (as a proxy for economically disadvantaged populations)
f. Total school enrollment

2. An absence database with:

a. Each date the teacher was absent (associated with the teacher ID)
b. In some cases the length of that absence
c. The reason for the teacher's absence

3. A central office roster with:

4. A central office absence database with:

a. Each date the staff member was absent (associated with the staff ID)
b. In some cases the length of the absence
c. The reason for the staff absence


Between 2019 and early 2020, a team of analysts cleaned and processed the data. The following clean up procedures and classifications were implemented:

The districts included in this analysis are:

In addition to the statistics, graphs, and tables generated in the main report, a study of correlations was conducted, to establish the relationship between the number of days absent of a given teacher and some of the teacher's, district's, and school's characteristics.

The variables used for this study include some of the ones submitted by the districts with their attendance data, plus some public information collected independently (e.g., percentage of students of color, maximum leave granted, etc.). All variables except tenure and school type were used in logarithms.

Days in contract year - days in teacher's contract year according to contracts retrieved and analyzed by NCTQ. For central office staff, this variable was provided by the district.

District enrollment - number of students in the whole district, obtained from each district's public demographic data.

Experience - in years, provided by district, encoded as follows for all analysis outside of the study of correlations:

FRL quintile - percentage of the student population that receives free and reduced lunch, usually provided by district. 121 Encoded into quintiles, a numeric variable ranging from 1 to 5, for all other analysis outside of the study of correlations.

Max sick leave - maximum number of days of sick leave a teacher can take in the district, obtained from NCTQ's Teacher Contract Database, which searches public information on school board documents and collective bargaining agreements.

Max personal leave - maximum number of days of personal leave a teacher can take in the district, obtained from NCTQ's Teacher Contract Database, which searches public information on school board documents and collective bargaining agreements.

Percentage of students non-white - 100% minus the percentage of the district's student body categorized as "white", obtained from each district's public demographic data.

Real base salary-experience - salary corresponding to the teacher's category of experience and the midpoint between a bachelor's and a master's degree, according to the year's salary schedule, divided by the regional price parity.123

School enrollment - number of students in the teacher's school (or base school, for the case of teachers who teach in more than one school), usually provided by the district but otherwise obtained from each district's public demographic data.

Student-teacher ratio - the rate between the variables District Enrollment and the Number of teachers.

Tenure124 provided by district, encoded as follows: tenure=1, no tenure=0.

Total leave - base total days of leave a teacher can take in the district, inclusive of sick leave, personal leave, and any other time granted, obtained from NCTQ's Teacher Contract Database, which searches public information on school board documents and collective bargaining agreements. It doesn't include any extra days teachers might gain for longevity, for example.

The results of this regression analysis are presented next. 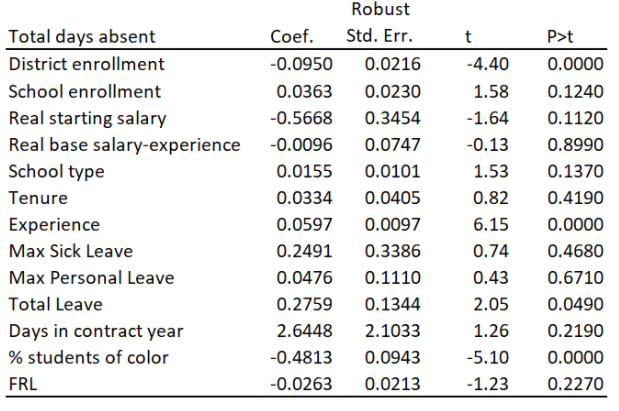 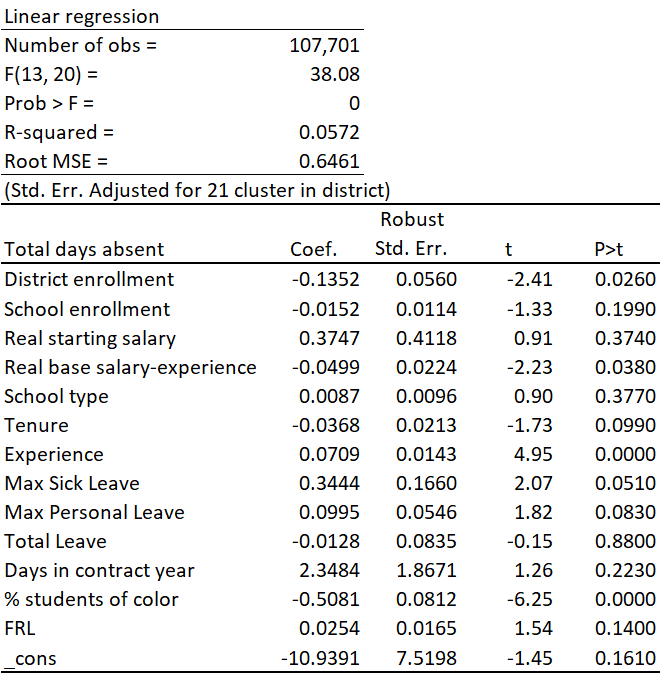 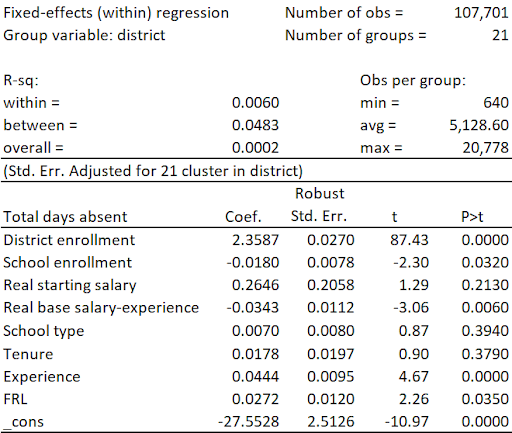 Note: the logarithms of all variables except for School type and Tenure were included in the regression. All other variables are included in their original levels. Refer back to the Variable description section of this document for details on these variables.


The variables that resulted most significantly related to teachers' attendance were:

District Enrollment: This variable is significant and negative in the univariate and the multiple regression, while significant and positive in the fixed effects regression. A negative coefficient means that larger districts tend to have teachers that are absent fewer days. The particular coefficient means that if the number of students enrolled in a district is larger by 10%, all else constant, the average teacher absences over the school year are 1.3% smaller. Given that the average number of absences of the teachers in this study is just over 9 days, this means that a 10% larger student population in a district decreases teachers' average absences by about an hour. A positive coefficient in the fixed effects regression indicates what happens when there is growth of enrollment within the district. A 10% enrollment increase in a given district appears to be accompanied by a 24% increase in teacher absenteeism.

Students of color: This variable is significant both in the univariate and the multiple regression (it is absent in the fixed effects regression because it's a district level variable). A negative coefficient means that the higher the district's percentage of students of color, the fewer days that their teachers are absent. This means that for every 10% increase in the student population of color, a teacher will be absent about 5% less (or in the case of this study, half a day less) over the course of the school year.

The following variables were significant in some, but not all, of the regressions:

FRL: This variable has a significant but small positive coefficient in the fixed effects regression, which captures the trends within each district rather than across districts. Across districts the relationship between FRL and number of absences is unclear. This means that within each district, in schools with higher levels of poverty, teachers tend to be absent more time. The average percentage of the student population eligible for free and reduced lunch in this study is about 70%. The coefficient then means that a teacher in a school with 50% of its student population eligible for free and reduced lunch is absent on average about 1% less than a teacher in the average school of this study with 70% FRL participation. Overall, what has been observed by graphing this data in relation to absenteeism, is that the relationship is not linear, and there is an increase in absenteeism with an increase in FRL participation up to the fourth quintile, and absenteeism decreases in the top quintile (highest percentage of economically disadvantaged students).

Max Sick leave (by district): A positive coefficient means that the more sick leave teachers have, the more total days of absence they have. This coefficient means that for every extra 10% of sick leave granted by the district (equivalent to a day, since the average sick leave granted by the districts in our study is about 10 days), a teacher on average is absent an extra 3.4% more or about 2.5 hours. This being the largest relationship between all types of leave indicates that teachers would use more sick leave than other types of leave if granted additional days.

Real base salary in teacher's experience bracket (adjusted for regional price parity): A negative coefficient means that the higher a teacher's estimated salary (according to their experience), the lower their number of absences. The size of the coefficient in the multiple regression means that for every 10% increase in salary, all else constant, a teacher will on average be absent 0.5% less over the course of the school year.

School enrollment: This variable is only significant in the fixed effects regression. A negative coefficient means that within each district, larger schools tend to have teachers who are absent fewer days. The particular coefficient means that if the number of students enrolled in a school increases by 10%, all else constant, the average teacher absences over the school year will decrease by approximately 0.2%.

Total leave (by district): A positive coefficient means that the more total leave teachers have, the more total days of absence they have. An extra 10% (or about a day and a half) of overall leave granted by the district increases a teacher's absence by about 2 hours on average over the course of the school year.

The remainder of the variables were not significantly related to the number of teacher absences in this study in either of the regressions. 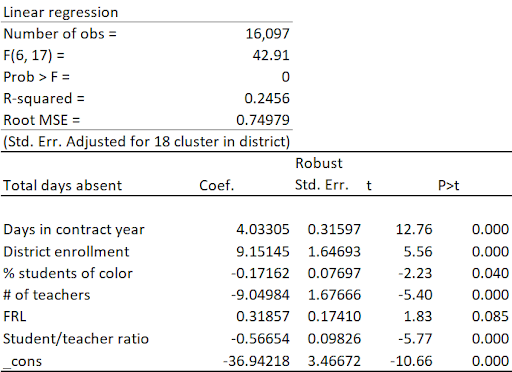 The limited data obtained with respect to the central office staff from districts limits our variable availability. The regression that was possible in this case contains the variables shown in the table above.

In the case of central office staff, it appears that the length of their contract year is positively correlated with their number of absences. The same can be said for the size of the district's student population and the proportion of students eligible for free and reduced lunch: the larger the student body in a district, and the larger its percentage of FRL eligibility, the longer central office staff are absent.