When it comes to their pay and benefits, will teachers always go with the bird in the hand no matter how many birds may be in the bush?

Apparently that is the case in Illinois, where teachers proved remarkably immune to a pretty generous pension deal, as documented in a new study by Maria Donovan Fitzpatrick. While previous research has shown that all workers, not just teachers, have a clear preference for a higher paycheck over the opportunity for greater retirement benefits, Fitzpatrick provides striking new evidence of just how little of their paychecks teachers are willing  (or able) to redirect in order to achieve greater pension wealth.

Back in 1998, Illinois gave teachers the opportunity to upgrade their defined benefit plans and purchase extra retirement benefits. At most, teachers were only willing to redirect 21 cents of their current salaries for every dollar they would receive later.

Even more noteworthy, Fitzpatrick’s estimations may still not paint an accurate picture of just how little teachers are willing to invest: she focused on Illinois Public School (IPS) employees with 22-28 years of experience. These veterans would not have to wait very long to receive the extra benefits, so one might have reasonably assumed that they were a lot more mindful about their pensions than the average recent college grad. While ability to pay is a real concern, teachers in the sample were already likely earning salaries on the higher end of the pay scale and were given five years to pay for the upgrade. What’s more, they were well-informed of the costs AND benefits of upgrading, and the Illinois pension system was well-funded at the time (so Doomsday scenarios that the system would be bankrupt by the time they retired were less likely).

While this may be a classic example of "irrational default behavior," (going with a default decision even if a different option may be in one’s best interest), the findings still provide strong evidence for states to consider as they tackle pension reform. In debates around pension reform, one of the running themes is just how satisfied teachers are with the status quo. Yet if teachers really do put a higher priority on what’s in their wallet today over tomorrow, that’s evidence of a preference that’s actually at odds with the current system—one which decidedly  tilts  towards tomorrow.

For more on teacher pensions, NCTQ will be out with its latest analysis of state teacher retirement policies on January 27.

Pension debt is crippling any meaningful increases to education funding

In light of the economic turmoil that COVID-19 is bringing about, pension shortfalls are likely to grow at an even more...

A workaround for counterproductive pension systems

No school district wants to lose their most effective teachers. But pension systems, which are under the purview of state... 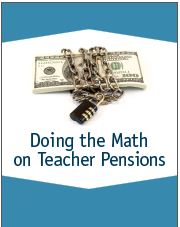 Doing the Math on Teacher Pensions

Just do the math and it is clear that things don't add up for teacher pension policies. NCTQ calculates that state teacher...