It may come as no surprise to educators, but a new study shows just how much principal turnover affects teachers and students.  In a recent blog post from the Albert Shanker Institute, Penn State Professor Ed Fuller examined prior research on the topic, noting that high principal turnover leads to greater teacher turnover, which in turn negatively impacts students.  As an unintended side effect, regular principal turnover can lead to teachers not investing in any change efforts, simply waiting it out until the principal leaves. Additionally, as more principal turnover leads to more teacher turnover, the likelihood that newbie teachers without any experience are hired also increases.
Professor Fuller and his colleagues added to previous literature by examining a large dataset from Texas.  They found that the average principal tenure is just over three years--not even long enough to see the freshmen class graduate--and that the initial level of achievement at the school in the year before the principal arrives is associated with the first-year principal retention rate, resulting in a large difference in the one-year retention rates between newly hired principals at the lowest- and high-performing schools. 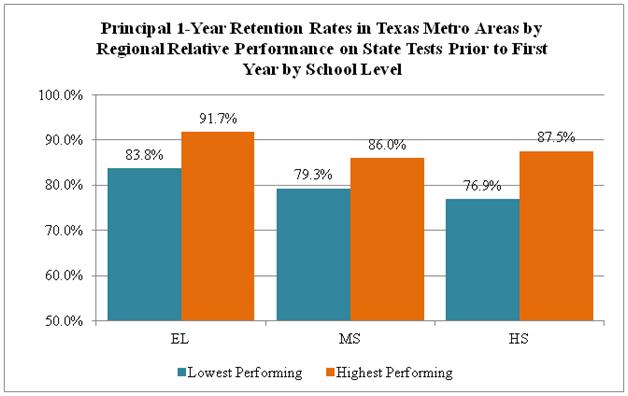