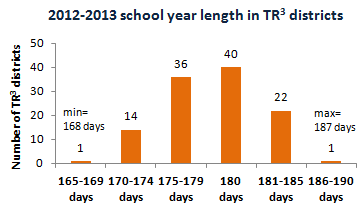 Tulsa has the shortest year of all Tr3 districts, with 168 days in its 2012-2013 school year--that's 7 fewer school days than it had last year. (The district reports a school year of 175 days--but that includes 2 parent/teacher conference days and 5 bad weather days.)

The district with the longest school year for 2012-2013 is Baltimore County. It has 186 days for elementary students and 187 days for secondary students. That's about a 4-day increase over last year.

Compared to last year, 25% of Tr3 districts have a longer school year, 22% have a shorter year, and in 53%, the school year remained the same. The Tr3 districts that lengthened their school year increased their number of school days by an average of 3, while those that shortened their year lost about 3 days.

Meridian, Idaho gained the most days--11--boosting it from a 163-day school year to 174 days, though that still puts its school year length below the TR3 average. Chicago, in a much publicized move, jumped from 170 to 180 days, gaining 10 days, and Dallas gained 7 days, with its school year climbing from 176 to 183 days. 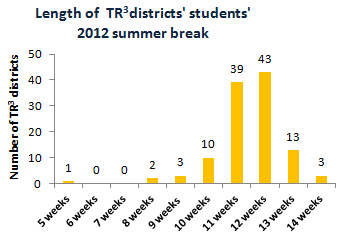 The districts with the shortest 2012 summer breaks are: Louisiana Recovery School District (5 weeks); Los Angeles and Indianapolis (8 weeks); and Oklahoma City, Broward County, Florida and Fresno (9 weeks). It's possible that with its loss of 15 days this school year, Louisiana Recovery School District will have a longer break during the summer of 2013.

Clocking in with the longest breaks, at about 14 weeks, are Meridian, Idaho; Anchorage; and Sioux Falls, South Dakota. School children in Meridian are likely to have less time to skip rocks and jump rope next summer because of the 11 additional days added to the 2012-13 school year.

Go to Tr3's custom report page to access all the data we use in Tr3 Trends and to compare teacher policies in 113 school districts nationwide. Send feedback to gmoored@nctq.org.