Most of the time, when a teacher is absent, a substitute is found to take his or her place. NCTQ's recent Roll Call report looks at teacher attendance in school districts across the country and identifies patterns in teacher absences. But less examined are patterns in substitute coverage. Are some teacher absences more likely to be covered than others? And what can be learned from the situations when it is not possible to find a sub?

Jing Liu (University of Maryland), Susanna Loeb (Brown University), and Ying Shi (Syracuse University) examined teacher absences and substitute coverage in a large California school district. They found that 7.5% of absences had no sub coverage, leaving classes to be covered by teachers in the building or by distributing students to other teachers' classrooms. They learned that some students were more likely than others to be affected by the lack of substitute teachers: schools with large numbers of low-income students, students of color, or with low levels of achievement had almost twice as many uncovered teacher absences.

The researchers examined a variety of school and teacher characteristics that might affect which schools subs are likely to pick, finding that the kinds of school and teacher information tracked in the district's data, like the teachers' years of experience or the poverty of the school, only explained about half of why certain absences were more likely to be covered. Substitute teachers reported that they consider two additional factors when agreeing to sub: their perceptions of the behavior of students at the school and the support that subs at the school receive from staff and administration, especially in connection with student misbehavior.

Not surprisingly, the study found that posting absences at least a day ahead increases the odds that a sub would be found. As shown below, absences posted the morning of the day when a sub is needed are filled about two thirds of the time, but coverage increases to 80% for absences posted the evening before the teacher will be out, and 90% of the time if posted 24 hours in advance. 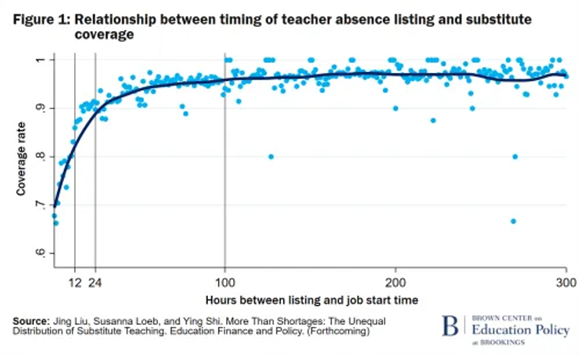