Know of a dance where you gotta move your muscle? No, we're not talking about the Cupid Shuffle, but the teacher shuffle that occurs when teachers transfer from one school to another within the same district.

We found a nifty graphic in a Wall Street Journal article highlighting the "dance moves" between three Newark schools during district efforts to turn around one low-performing high school:  Malcolm X. Shabazz. It shows how the district danced around mandates that required turnaround schools to change at least 50 percent of teachers working in the building in order to receive federal grant money.

In this case, the shuffle seems to have paid off, but not for the school it was intended to benefit. The performance of Malcolm X remained relatively unchanged but Central High, the school that received the "lemons", saw its achievement nearly double. What happened at Central High to cause such gains?

Regardless, it appears this will be Newark's last dance of the teacher shuffle. A directive from new Superintendent Cami Anderson eliminates forced placements and is also supported by new state guidelines. 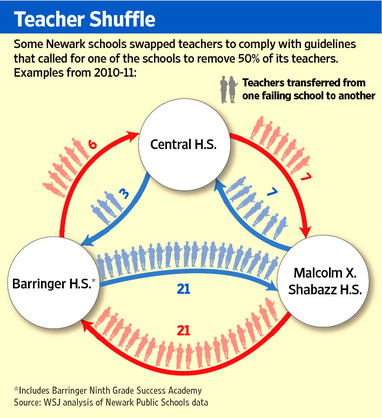 Substitute Teaching 101: When no one answers the call

Are some teacher absences more likely to be covered than others? And what can be learned from the situations when...