We've known for years that students of color are underrepresented in gifted education programs across the country, with Black and Hispanic students making up 40 percent of public school attendees but only 26 percent of students receiving gifted services.

While the problem has been acknowledged, there's been little understanding as to why students of color continue to be so underrepresented. Some conclude that it's the inevitable result of the persistent achievement gap. For others, it's just stark evidence of racial prejudice.

Previous research into this issue has been hampered by analysis which couldn't dig deep enough as data were only available at the school, not classroom, level. Vanderbilt researchers Jason A. Grissom and Christopher Redding authored a more recent study which uses classroom data using the National Center of Education Statistics' Early Childhood Longitudinal Study sample, making it possible to control for variations in poverty, health, or test scores.

While differences in students' test scores were able to explain why a disproportionate number of Hispanic students failed to be admitted into the gifted programs, such differences were not able to explain the lower percentage of Black students when compared to their white peers. In fact, a Black student could have the same test score as a white student and be half as likely to be assigned to a gifted program.

Grissom and Redding attribute these staggering findings to two factors.

More disturbing is the second reason. White teachers were far less likely to refer their Black students to gifted programs. On the other hand, Black teachers referred all races of students with equal frequency.

So what can be done to address this problem?

1. Schools could increase teacher diversity so that Black children are more likely taught by Black teachers.

The problem is that this solution is too long-term, with too many students being overlooked in the meantime. And, even if we manage to significantly increase teacher diversity, there will still be too many teachers who fail to recognize giftedness in Black students. After all, 80 percent of all teachers are white.

2. Don't let teachers decide who gets into a gifted program.

Universal screening has led to an increase in gifted minority identification in the districts which have gone that route, but it is an expensive solution and still prone to scoring bias.

3. Train teachers and teacher candidates to recognize their own bias.

This last solution is what we assert is most practical and immediately actionable. Why not, for example, as part of any teacher's training have them participate in a simulation in which they evaluate essays of students with stereotypical Black and white names? As we learned from a similar experiment, teachers will likely be surprised to learn the extent to which they unconsciously judge students differently based on their race. Just making teachers aware of these behaviors will be an important first step toward changing them.

We'd suggest one additional solution along these lines: teachers, faculty, and school districts should make it routine to employ bias checks on any set of decisions where race might have been a factor, however unintended: line leader in kindergarten, the top reading group, suspensions, honors classes, crossing guard helper, and gifted referrals—the million and one decisions made in schools every day which can send the wrong signals to children about their place in the world. 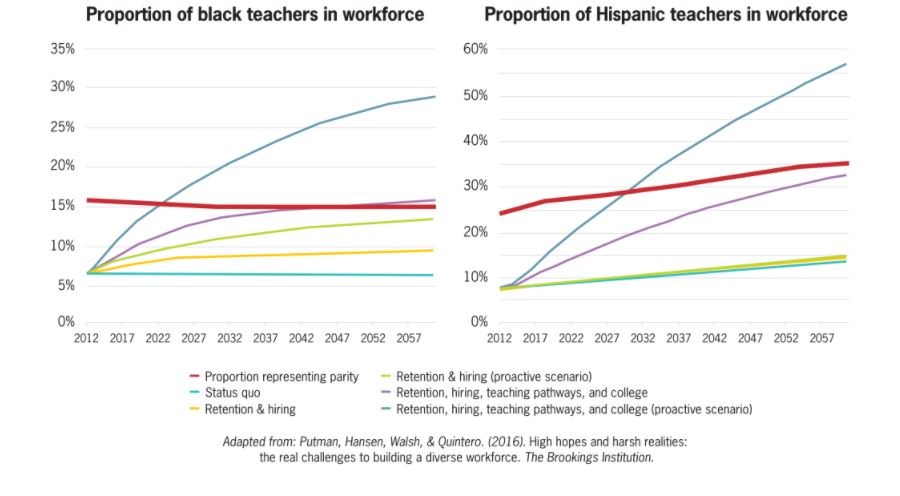 Diversity in the Teaching Workforce: False Choices and Faulty Tactics

We can all agree that building a more diverse corps of teachers is important. While only a few studies have...