Miami has distinguished itself among other urban districts on NAEP tests, and Florida has produced some of the biggest gains nationally for African American and Hispanic students. Miami is undertaking a host of reforms to improve teacher quality, including revising its evaluation instrument and implementing a new performance pay model. Many of these reforms are also spurred by aggressive state legislation aimed at improving student achievement, and fundamentally changing the teaching profession statewide. Still, only about one-third of Miami's fourth graders are proficient in math and reading, leaving much work to be done.

Like most districts in the United States, Miami has done a poor job supporting teacher development and holding teachers accountable for their performance. Only 10 teachers out of a workforce of more than 20,000 were fired last year for poor performance. This is the lowest rate of dismissal NCTQ has encountered in the districts it has studied.

Additionally disconcerting was that Miami-Dade does not centrally track or use teacher evaluation data - which ought to be the linchpin of its professional development, staffing, and compensation strategies.

Although Miami commendably devotes a relatively low proportion of teacher salary toward rewarding advanced degrees, neither does it link pay to effectiveness. Instead, it reserves 70 percent of total raises until a teacher has served for 18 years, a pay structure that is punitive to new teachers. 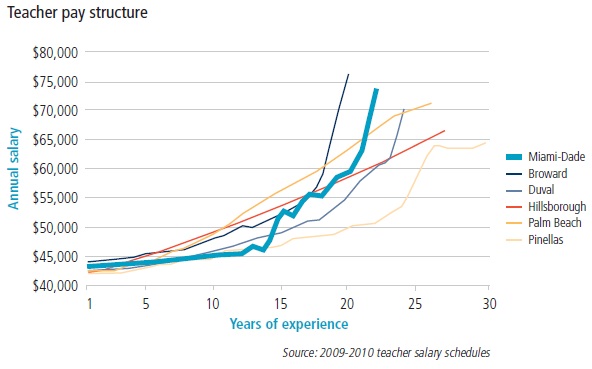 For more findings and recommendations, and to read the full report, click here.