This fall, the staff and board of NCTQ spent an afternoon visiting the Legacy Museum in Montgomery, Alabama, a project of the Equal Justice Initiative designed to upend Americans' sorry understanding of racism. Considering myself already upended, I approached the visit as a tourist would, eager to learn some new things that I would bring home to share with my husband over dinner. Hah!

Relying only on the voices and words of the persecuted as well as the persecutors, the museum begins with the atrocity of slavery and compellingly shows that those stories that you thought of as dead and laid to rest persist well beyond 1865, right up to modern day with a ferocity no less horrifying. As I would learn, the pleading letters written from prison in the year 2000 sound eerily similar to the desperate letters scribed for the enslaved two hundred years earlier.

While I like to think that I may have gone into the museum with a reasonable understanding of racism (for a white person), Montgomery presents on a silver platter something neither my swanky education nor my career in education ever did. On display is the nation's overt and uninterrupted sanctioning of racism. Following the end of slavery in 1865, racial oppression has taken new forms, including the systematic lynching of more than 4,000 souls in the Jim Crow era followed by the opening of another tributary for subjugation: mass incarceration. This experience opened my eyes, casting new light on work I've undertaken for decades, but more importantly changing how I think.

So what I am going to suggest here is not something I want to be true, in fact I am not altogether sure it is true, but I am at a point where I now fully believe it is likely true.

Here goes. Is the reason Americans tolerate unnecessarily high rates of kids who never learn how to read yet another manifestation of institutionalized racism? To be clear here, I am suggesting there may be more going on here than mere indifference over the fact that generations of kids have never been taught to read—even though we had the means to prevent it. No, it's something more pernicious and overt at play, though perhaps not always consciously. How else can we explain the agonizingly slow pace—arguably backwards momentum given the latest NAEP scores—by depriving teachers of essential knowledge and dismissing effective curricula for teaching kids to read? It's 2019 and we're still having the same fights we did in 1999. 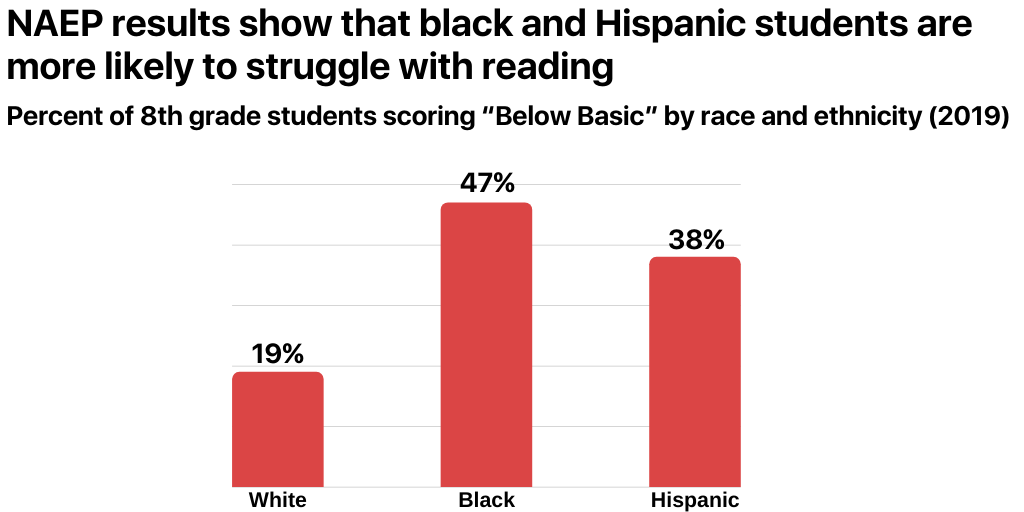 I'm left with nowhere to go here, believing our collective acceptance of reading failure rates is yet another ugly manifestation of active racism at play—perpetuating the grotesque legacy of slavery, Jim Crow, and mass incarceration. In fact, I'd put a big asterisk next to 'incarceration' pointing out that high numbers of kids who get locked away can't read. The problem is not so much segregation—where the Legacy Museum currently lays the blame—but the fact that we deprive kids of the one skill they need to make it in the world. If nearly half of middle-class white kids weren't able to read, I'm confident that schools would have responded in a New York minute, launching an all-out effort to retrain teachers and adopt curricula unambiguously faithful to the science, while boycotting science pretenders such as Lucy Calkins or Fountas and Pinnell. Instead we've allowed them to thrive. In fact, I think there's a story to be told, that doesn't seem all that different from a 60 Minutes-like exposé of a certain class of patients being deprived of a new cancer drug.

Whether my hypothesis holds up to scrutiny, there's no question that our tolerance for foot dragging is noticeably different depending up on which kids we continue to fail. The Legacy Museum needs a new annex, one that really delves into how America's education system works to ensure that black and brown students stay down.