Here are some important numbers that keep popping up in the discussion of the Chicago teachers' strike: 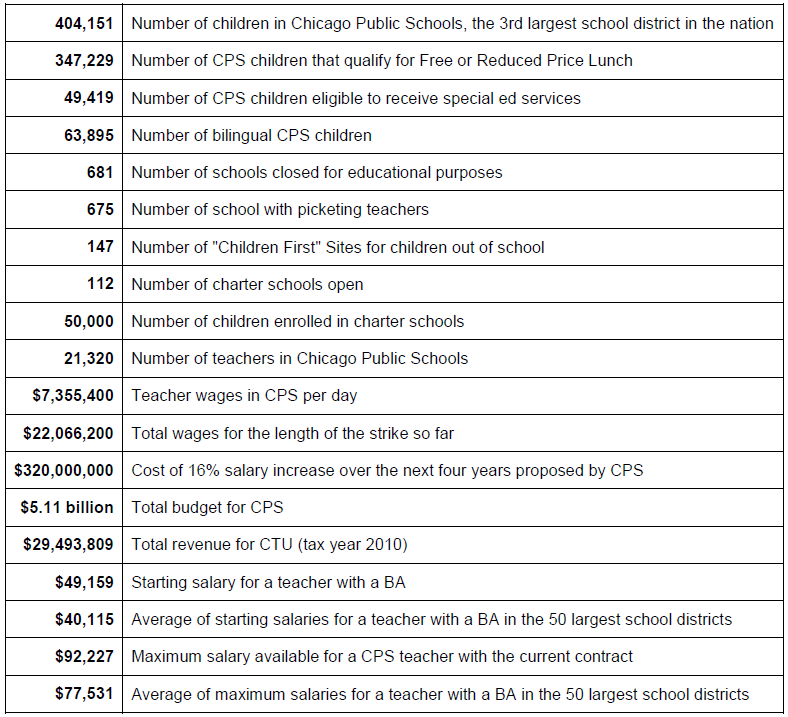 What are the main sticking points in the negotiations?

Illinois law requires a significant portion of the evaluation be based on student achievement--the value of 'significant' is left to the district to define. Under the CPS plan, the weight given to students' learning gains (as measured by student test scores and other objective measures of student performance), will increase gradually over five years until it accounts for 35-40 percent of a teacher's evaluation. Student feedback will comprise 10 percent of the evaluations, and observation will remain the largest factor.

The Chicago Teachers Union is opposed to using test scores as part of the new teacher evaluation plan. CTU also says initial phase-in of the new evaluation system could result in 6,000 teachers (30 percent of union members) being discharged within one or two years.

CPS has offered an average salary increase of 16 percent over four years (which includes cost of living increases and some increases to the "lanes and steps" that reward experience and advanced degrees).   Working hours have also changed;  the school day has increased by 40 minutes and the school year has increased by 8 days since the 2011-12 school year.

The CTU President says CPS and CTU are not far apart on compensation, but the CTU said it wanted more health care benefits and bigger first-year increases to compensate for the longer school days.

The CTU wants to restore "recall rights" for teachers, which allow those displaced through layoffs or school closures to get priority for rehiring. Recall rights were eliminated in 1995.  CPS has offered three options for laid off teachers:

Some Chicago Public School principals have weighed in with a letter stating their belief that it is "imperative that principals be given the autonomy they need in the hiring process to do what is necessary to support our students and their learning," essentially opposing broad recall rights for teachers.

What happened during the last strike in Chicago?

This strike is the first in Chicago in 25 years; the last Chicago strike began Sept. 8, 1987 and lasted 19 days.  Teachers demanded a 10 percent raise in the first year and a five percent raise in year two as well as class size reduction in some schools.  The district's proposal was a 1.7 percent raise paid for by shortening the school year.

The strike ended with a four percent raise in first year, with a second-year raise contingent on funding being found externally.  The superintendent at the time, Manford Byrd, said the agreement would mean the immediate layoff of 1700 teachers and staff.  School was extended a week to make up for the strike. Classes were also held during spring break and half of winter break.  Funding for the bus system was cut severely, hampering the ability of some students to get to school.

Strikes were more common in the infancy of the labor movement.  Collective bargaining laws were passed in the 60s and 70s and the resultant strikes were to be expected as both sides flexed their muscles and tested limits. As workers started to assert their voices in those and other issues, occasionally the matters came to a head and there was a strike (or several). As bargaining fell into more of a routine, however, strikes diminished and ways to work together emerged.

How are Chicago schools doing academically?

Chicago Public Schools has been a "program improvement" district for eight years and it under-performs the state average in every category reported on the Illinois Interactive Report Card.