Over the past century, science has revealed a great deal about how the brain functions. While there is much we still don't know, we now understand some of the most essential principles that describe how all people, including children, learn and remember information.

A 2016 NCTQ report, Learning about Learning, looked at what future teachers learn about the six instructional strategies that are most firmly rooted in research, such as returning to key concepts over time, and presenting new ideas through both words and images. Our study of 48 teacher prep programs found scant evidence that programs teach these strategies and even less evidence that candidates were asked to practice them.

Researchers in Belgium and the Netherlands have now replicated part of the NCTQ study, examining how degree programs in those countries teach two of the six strategies: distributed practice (returning to key material weeks and months later) and retrieval practice (asking students to recall information without giving hints or reteaching it). They found that while Dutch-language teacher preparation programs are somewhat more likely than their U.S. equivalents to at least acknowledge the strength of these two strategies, most barely skim the surface. 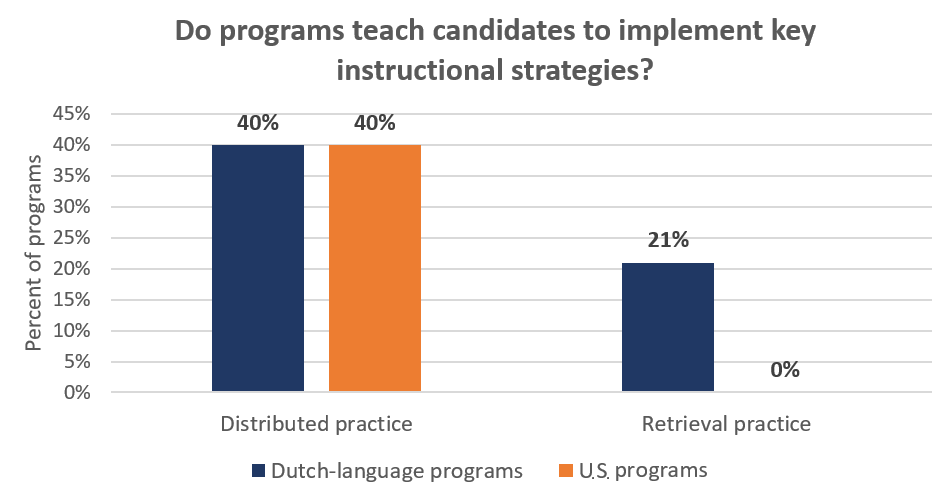 The authors of the European study—Tim Surmaa, Kristel Vanhoyweghen, Gino Camp, and Paul A. Kirschner—expressed many of the same concerns about Dutch-language textbooks that Learning about Learning did about American texts used in relevant coursework. A common problem is textbook authors' habit of citing each other instead of independently examining original research. As a result, future teachers learn about educational practices that have gained popularity within teacher education's echo-chamber, but which may not necessarily be the most effective or universal.