Class size is one tough issue. On the one hand, reducing class size is a perennial favorite among teachers and the public—which is why politicians so eagerly endorse the idea. On the other hand, there is little evidence that reductions in class size—at least the incremental initiatives that are all most communities can afford—ever accomplish much.

Class sizes in the United States have decreased significantly in recent decades, and appear to be falling again after the slight increase they experienced during the recession. Still, over 55 percent of American teachers surveyed in 2018 indicated they would like to see additional education dollars dedicated toward lowering class sizes, second only in priority to raising teacher salaries. In another 2018 survey, a quarter of teachers indicated they would be "very likely" to strike if class sizes were increased.

The problem with class size reductions is that they are an extremely expensive reform and are based on an assumption that school districts will be able to find enough high quality teachers to meet new needs. Big reductions in California and Florida both showed how difficult this approach can be to implement.

There is research showing that significantly smaller class sizes (< 15 students) do improve academic outcomes for certain student populations, specifically early childhood, low-income, and students of color. Despite these findings, most states and large districts in the country make across the board reductions that end up being more costly and less effective. 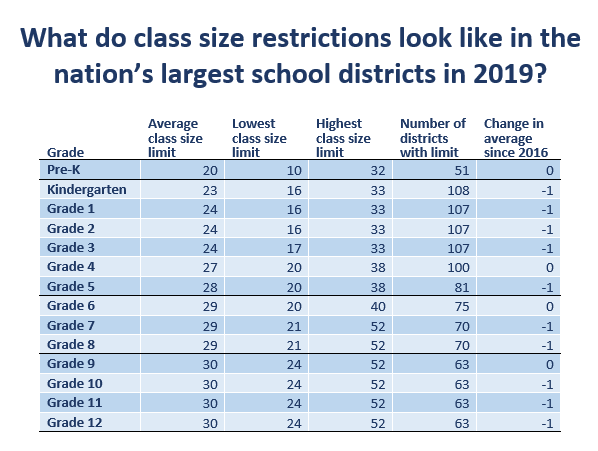 Most of the districts (77 percent) in states with strict class size limits just rely on the state law, but there are 18 districts that go beyond state policy with either added restrictions for additional grades or smaller maximum class sizes.

About half of the districts in our sample residing in states without size restrictions (16/30) have put in place their own policies for maximum class sizes. For the seven states that have class size goals or incentives for districts rather than strict limits—Idaho, Massachusetts, Minnesota, Ohio, Vermont, Wisconsin, and Wyoming—the largest district in each except for Anoka-Hennepin School District (MN) and Laramie County School District 1 (WY) has set their own maximum class sizes.

About half of the school districts with class size restrictions have specific policies for what happens when those limits are exceeded. These policies range from requiring that the affected teacher and principal meet to ensure that the larger class size will not adversely impact student learning in Jeffco Public Schools (CO) to the superintendent having the option of instituting an enrollment freeze for the school until class sizes are back below the limit in Jefferson Parish Public School System (LA). 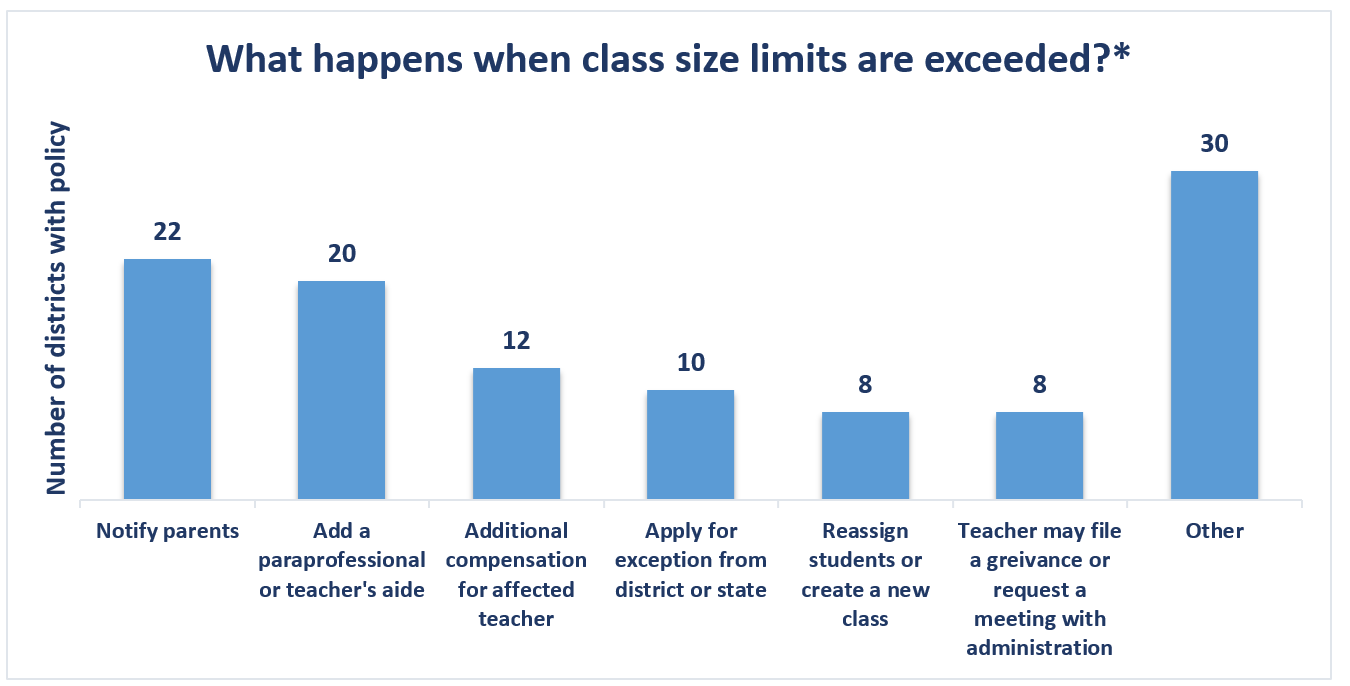 *Note, districts with policies that have multiple actions or options for when class sizes are exceeded are counted multiple times in this graph.

The most common action required by school districts—ensuring parents are notified—doesn't have real teeth, nor do the policies that require a simple review of the situation or discussion of next steps (captured as "Other" in the graph above). Ten districts, all in Texas, may apply for an exception from the state commissioner.

For class size limits to be truly implemented, actions such as adding a paraprofessional or teacher's aide to the class, providing additional compensation to the affected teacher, or reassigning students and creating new classes are the most powerful, but fewer than 20 percent of districts have at least one of these policies. Teachers of at least some grades or subjects receive additional compensation when the class size limit is exceeded in:

Most large district class size restrictions are across the board, but there are some ways in which they are being used to align with what research indicates will be most beneficial for students.

Age restrictions. The most common way districts (and states) think strategically about class size is by having lower limits for early childhood grades (Pre-K – 3). The average class size limit in our sample of districts increases from 24 to 27 students between grade 3 and grade 4. Clark County School District and Washoe County Public Schools in Nevada have the lowest limit of 16 students for grades K-2, dictated by state law. State law in Florida also mandates that their districts (15 of which are in our sample) have no more than 18 students in grades Pre-K – 3.

Subject-based restrictions. There are 26 large districts in our sample that vary class size restrictions based on subject, most often with lower limits for core subjects such as English Language Arts and with higher limits for electives. For example, Oakland Unified School District (CA) has a maximum class size of 52 for some secondary electives.

With class sizes considered such an important issue in K – 12 education it is surprising to see only a handful of large school districts either employ them strategically or ensure mandated limits are enforced.

To explore these state and district class size policies and dozens of other issues, visit the Teacher Contract Database.

A look at districts’ planning and collaboration policies for their teachers

Supporting teachers through mentoring and collaboration